Elahi’s Intertexts: The Fall of Icarus

Pieter Bruegel the Elder, Landscape with the Fall of Icarus (c. 1588) 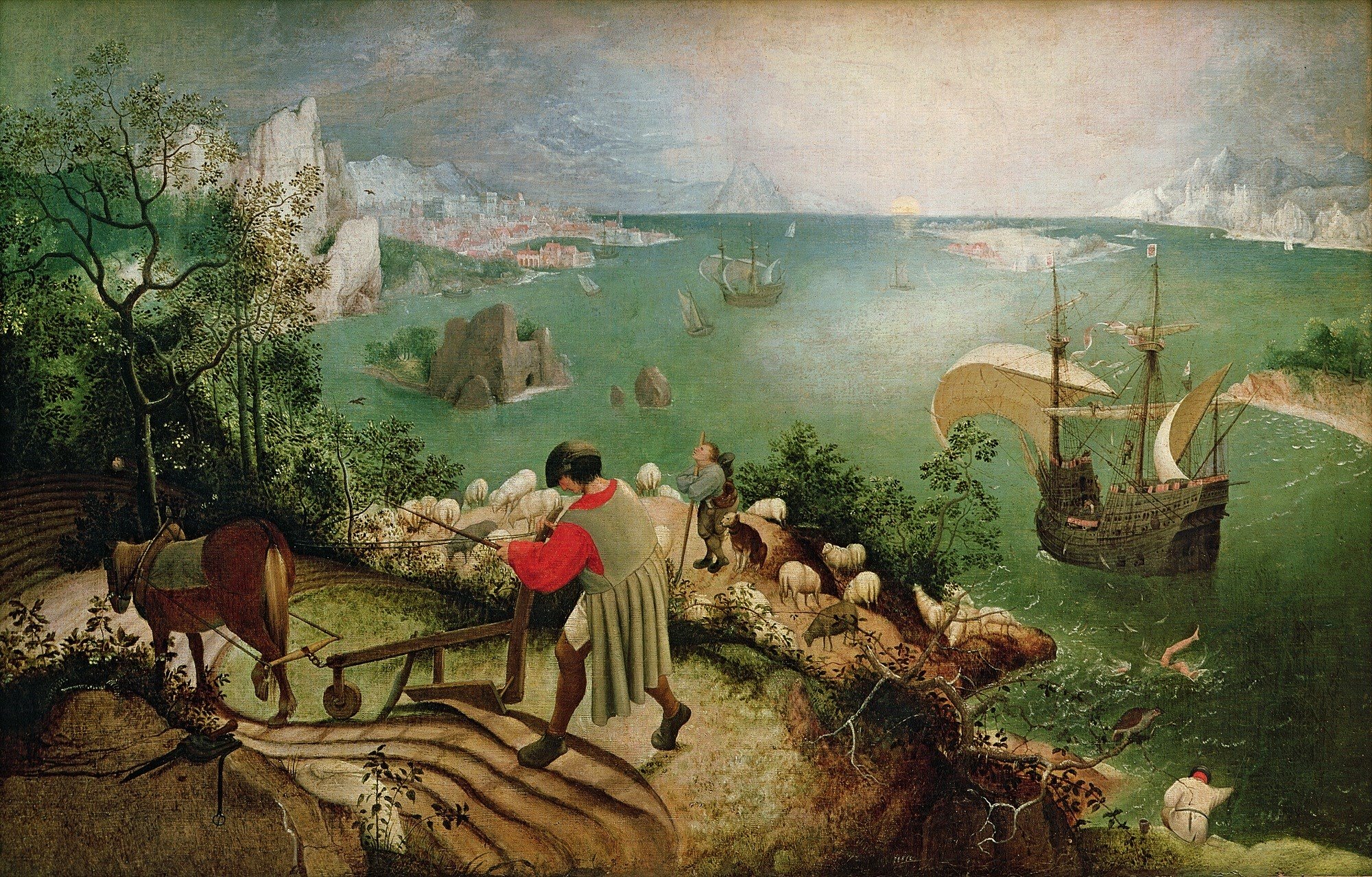 1.
Elahi’s poem “Five Scenes from Icarus” (later included in Youths) translates Greek mythology into an Iranian milieu. Our translation of the poem is forthcoming in The Kenyon Review (March/April 2019 issue); hence we can only summarize it here. We will post it as soon as it is published. In lieu of the translation, here is a summary, followed by the text read in Persian by the co-translator Kayvan Tahmasebian.

“Five Scenes from Icarus” offers five variations on the descent of Icarus, the master craftsman, to the earth. The “scenes [majles]” in the title refers to the traditional Iranian art of screen-reading (pardeh-khani), whereby public readings of Ferdowsi’s Book of Kings and oral traditions relating to Imam Hussein’s martyrdom were staged in front of a large canvas depicting scenes from the lives of the holy Shiite Imams. Performed in coffeehouses, these screen-readings aimed first and foremost to move the audience. Throughout the poem’s dream sequences, Elahi places Pound’s modernist poetics side by side with the incantations of the Zoroastrian Gathas. One paradigmatic sequence interweaves the Shiite legend of the Imam Reza’s protection of a deer from certain slaughter with the myth of Icarus, descending from the sky to the earth. As if speaking for his oeuvre in general, Elahi wishes in this sequence that “poetry could mix the two legends [of Shiism and Icarus] together.”

INTERTEXTS: Other famous ekphrastic readings of the Icarus story


About suffering they were never wrong,
The old Masters: how well they understood
Its human position: how it takes place
While someone else is eating or opening a window or just walking dully along;
How, when the aged are reverently, passionately waiting
For the miraculous birth, there always must be
Children who did not specially want it to happen, skating
On a pond at the edge of the wood:
They never forgot
That even the dreadful martyrdom must run its course
Anyhow in a corner, some untidy spot
Where the dogs go on with their doggy life and the torturer’s horse
Scratches its innocent behind on a tree.

In Breughel’s Icarus, for instance: how everything turns away
Quite leisurely from the disaster; the ploughman may
Have heard the splash, the forsaken cry,
But for him it was not an important failure; the sun shone
As it had to on the white legs disappearing into the green
Water, and the expensive delicate ship that must have seen
Something amazing, a boy falling out of the sky,
Had somewhere to get to and sailed calmly on.

3.
William Carlos Williams, “Landscape with the Fall of Icarus” (1960)

According to Brueghel
when Icarus fell
it was spring

a farmer was ploughing
his field
the whole pageantry

of the year was
awake tingling
near

the edge of the sea
concerned
with itself

sweating in the sun
that melted
the wings’ wax

unsignificantly
off the coast
there was

a splash quite unnoticed
this was
Icarus drowning